THE MOST COMMON MANUAL PALLETIZING INJURIES

Palletizing as a way to efficiently transport goods has been around for a long time. Manual palletizing is centered around one major innovation, the pallet itself. These wooden structures acting as a base for crates or bags of merchandise allowed companies to organize and load products faster. However, it relies on manual labour to carry the products, and that practice is still surprisingly common today. Not only is manual palletizing a practice that requires more space, it’s also significantly more dangerous to the workers than the alternatives.

Robotic palletizing refers to a variety of different options, and not all of them are as costly as you might think. The main goal when considering robotic palletizing is to pinpoint tasks that are specifically dangerous to human workers, even when using proper techniques. Robotic palletizers can also handle much higher outputs than humans, up to 200 cases/minute for certain applications. 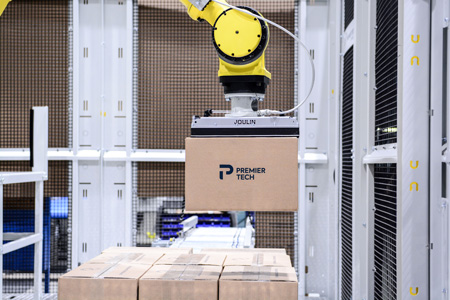 The most common application involves robotic arms that carry prepared boxes to the pallet, and then carry the pallet to a location where they can then be loaded onto a truck. Repetitive motions such as picking up a crate always have some form of negative outcome on the human body. Replacing those stress points with a robotic palletizer allows you to reassign your workers to more appropriate, safer assignments.

The dangers of manual palletizing

While there have been several improvements over the last few decades, warehouses and production floors are still considered by most people and organizations as dangerous workplaces. As an employer, there are countless ways you can make your workforce’s environment safer, but several risks related to manual palletizing simply don’t have a good solution.

Heavy weights being carried by workers cause back strain, even when correct lifting techniques are being used. The same can be said for repetitive motions causing stress on muscle tissue. Industrial workplaces and techniques have greatly evolved but these are limitations of the human body. Even the best methods of lifting weights and managing the movements found on a production line are never optimal for your employees in the long run.

Another often overlooked danger is related to the pallet themselves. Wooden pallets can easily cause splinter wounds to workers, especially when working quickly. Pallet wear can also cause products to fall over, potentially hurting workers in the vicinity. Robots obviously aren’t affected by weight, and since robotic palletizers operate in gated off areas, falling products are less of a threat to your labor.

A few tips when switching to robotic palletizing

Bringing a robotic palletizer into your operation has to be done carefully. The main concern from an operator point of view will be the cost. While it is undeniable that robotic palletizers can have steep upfront costs, they pay for themselves extremely quickly in increased productivity. No matter the robotic palletizer company you decide to go with, your first task should be working with them to crunch the numbers behind the project. This is also a great opportunity to gage their service and how they answer your questions. Robotic palletizers are complex machines,

Another important step that should be handled early is putting in place a health and safety plan around the use of the robotic palletizer. For most of your employees, this will be a new experience, and can be perceived as dangerous. After you’ve reassured your employees that this new equipment won’t replace them but rather help them, explain to them all the safety measures you’ve put in place to ensure the operator’s safety as well as the workers around the new robotic palletizer. Have everything in writing, plainly explained in order to make this a positive experience for everyone involved.

Human workers will always have a role in industrial operations, there’s simply too many touchpoints that can’t realistically be handled by robots. However, there’s no reason to keep your workers in situations that are dangerous, or that have long term effects on their health. Adding a robotic palletizer is not only an investment in your productivity, it’s an investment in your most important resource: your team.