How Does a Palletizer Work?

The first conventional palletizers were invented and installed in factories in the early 1950s. When they first appeared on the market, they were nothing short of revolutionary, and allowed for dramatic increases in productivity and worker safety. Back in those days, these machines were entirely mechanical and still required a lot of worker involvement to run.

Nowadays, these machines are almost completely automated, have a slew of options and can do a lot more than stacking bags and boxes on top of each other. Understanding how these machines work is often the first step our clients need to take in order to decide which type of equipment they need to opt for.

Whether robotic or conventional, they all have the same purpose: Stacking boxes or bags on a pallet so they can be transported. It seems simple at first, but a variety of factors then influence which type of equipment you should use.

Before deciding, the needs must be clearly identified. How many products are to be handled? What’s the production rate you need to reach?Knowing this information will help you decide whether to go with conventional or robotic. Ultimately, you’re the most informed person when it comes to knowing what your line needs in order to be more optimized. 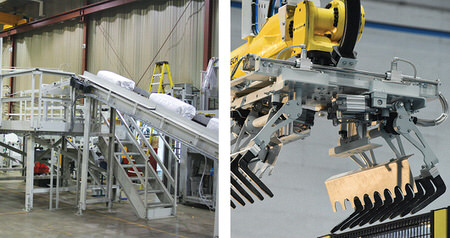 How Does A Conventional Palletizer Work? 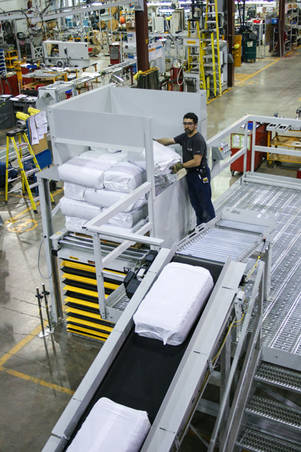 To give you a thorough explanation of the inner workings of palletizers, it’s important to first separate them into two categories: Conventional and robotic. Conventional versions are still largely mechanical and are controlled by a computer. Pallets are fed at the bottom of the machine, and bags are stacked from the top as they come on conveyor belts. Robotic palletizers are essentially large robotic arms that pick up products and move them where they need to be.

First, let’s look at conventional palletizers, which can be divided into two sub-categories: low level and high level.
A low level palletizer handles products carried by conveyors. Products are aligned or rotated according to specified configurations. Then, they are pushed against each other to form a row. Then, the row is pushed or lifted by a tool that places the products on the formation table according to the chosen pattern.

The rows are formed, one after another, until a layer is complete. The formation table, now containing a complete product layer, is raised or lowered until the stripper plate is correctly positioned to gently discharge the products onto the pallet. Each layer is created in this manner until it is full. The pallet is then removed, replaced by an empty one, and the process starts over.

With high level palletizers, the products are also brought by a conveyor, but instead of raising or lowering each completed layer for discharge, it is the pallet that is raised or lowered while product layers remain stationary. The high level palletizer can reach higher palletizing speeds and is usually chosen to palletize compressible products, since each layer is compressed on all faces, including its top.

How Does A Robotic Palletizer Work?

Now, let’s talk about robotic palletizers. Obviously, their key element is a robot capable of autonomously performing the tasks assigned by a programmable logic controller. Another crucial component is the gripper (end- of-arm-tool), which is usually customized to handle specific products.

A robotic palletizer can handle one or more units at a time according to pallet configuration, and forms multiple layers after picking the products off a conveyor. One of the robotic palletizer’s major assets is its ability to depalletize using a vision system allowing them to scan the bags or boxes to know what is inside them and sort them in the correct order.

Various grippers give the robot great versatility and constitute one of the robotic palletizer’s most important elements. Its specialized end-of-arm tooling can be adapted to almost every need. From vacuum to lateral, finger, and magnetic grippers, they are designed to handle multiple types of containers at a time, regardless of their shape.

The Best Palletizer For You

Whenever we start a new project with a client, we always say there is no best palletizer or machine, only the one that is right for your business. The technology has come an extremely long way, but their innovations haven’t been focused on making the ultimate one, but rather to allow them to handle any kind of situation with the right combination of tools.

Saying that conventional is faster and that robotic is more versatile isn’t the end of the discussion. Certain industries are better served by one, and in some cases, both types are needed to achieve the right solution for you. That’s why it’s so important to understand how these machines work before integrating them into your production line.